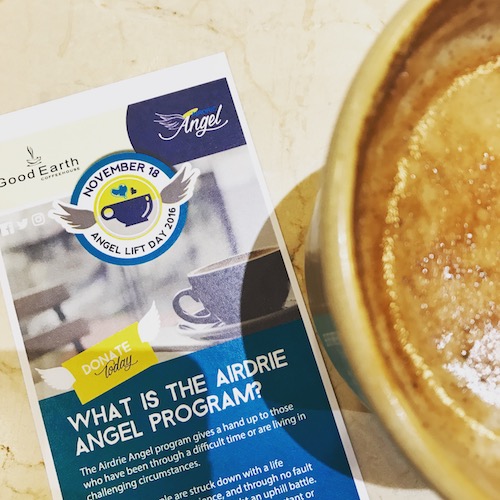 It’s funny how things come together. We have known Becky and Jason Diebolt from Good Earth CoffeeHouse in Airdrie for a few years now. As we got to know them better and better we just knew they were people that we wanted to work with in some capacity.

In the summer of 2015 at one of the Airdrie Angel brain storming sessions we talked about a pay it forward idea with coffee. The concept came from a story we had heard where people in Venice, Italy would order a cup of coffee and "one for the wall". Here is a link to that story if you are interested. So with that we decided that we wanted to approach Becky and Jason with “our” one for the wall idea.

The next day I sent Becky a text saying that I wanted to get together with them to discuss a fundraising idea. Becky responded by saying "That is so weird. Just a couple of days ago Jason and I were discussing ways to give back to the community and Jason said let’s contact Matt about the Airdrie Angel program". Becky said, "Matt, I literally started composing the email to you earlier today."

While I prefer the saying Great Minds “Don’t” Think Alike…this time I will agree that Great Minds Do Think Alike and the relationship between the Airdrie Angel and Good Earth CoffeeHouse was off.

We started by hosting our web-site launch party at the cafe. At the event we introduced the new web-site and started our version of “One for the Wall”.  The idea is that someone can buy a pair of wings for $5 and “Earn their Wings”.  When they buy their wings they hang them on the board and when the board is full we do an Angel Blitz.  During an Angle Blitz we take all the funds that have been donated and pay it forward to people who come into the cafe by buying their coffee for them.  It's always really fun to see the different reactions of grattitude and the coolest part is that most people pay it forward again and the board is filled up before the blitz is over!!

Now to the Angel Lift Day. This was the original idea that Becky and Jason came to us with. They wanted to have a day where all proceeds from brewed coffee would go to the Angel program. Pretty simple concept. Buy a coffee and someone in our community is going to benefit from it. We raised a little over $700 in 2015.

Today is the 2nd annual Airdrie Angel Lift Day at Good Earth. This year we decided to do it on a Friday rather than a Saturday thinking that more brewed coffees would be sold on a week day. We also pre-sold 12 cup coffee tote’s for $25 and delivered them! In fact the delivery’s started at 6am this morning. Thank you Marie!!

Regardless of how much money Good Earth raises today we are all so humbled by the support we get from the local community and such amazing business owners like Becky and Jason. When we started the program back in January of 2013 we thought we would get support from our community but we never expected anything like this. That being said we should have...After all this is Airdrie!!